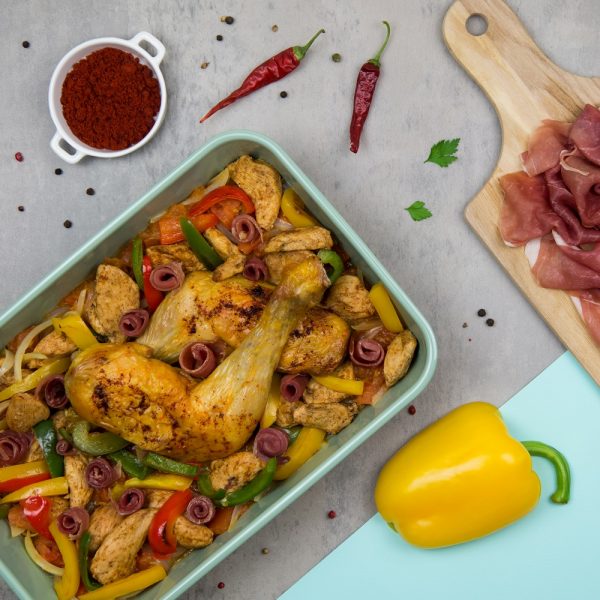 Cut the chicken into pieces, then sprinkle with Espelette pepper.
Heat a heavy pan over a brisk flame. Peel the tomatoes and quarter them.
Put the chicken in the pan to brown. Meanwhile, peel and finely chop the onions and the garlic.
Remove the seeds and cut the peppers into thin strips.

Cut the Bayonne Ham finely into small slivers.
Take the chicken pieces out of the pan once they have browned on all sides.
Add the oil and throw in the pieces of Bayonne Ham.
Let these cook for two minutes, stirring the while. Add the onions and the garlic.
Then add the sweet peppers, once the onions are transparent.
Stir for a further minute, before turning the heat down and adding the tomatoes and the bouquet garni.
Stir and leave to simmer for 10 minutes.
Mix half a teaspoon of Espelette pepper in a spoonful of the cooking juices before adding a glass of white wine and returning the liquid back to the pan.
Stir and adjust the seasoning if necessary.
Put a lid on the pan and leave to simmer gently on a low heat for a further 30 minutes.
Sprinkle with chopped parsley and serve.